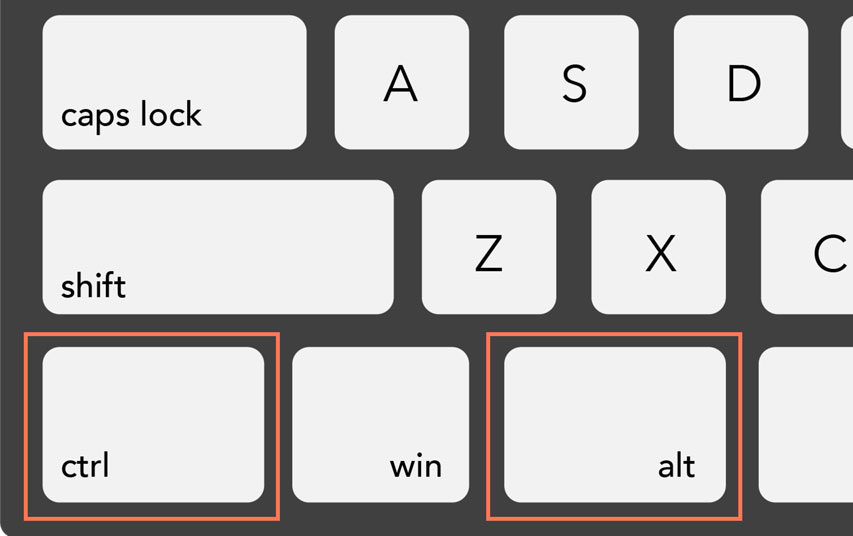 Ctrl+C is used to copy, Ctrl+X to cut and Ctrl+V to paste a selected item.

Copying an element leaves the original intact and makes a copy of it in the “clipboard” which can be pasted (recopied) at the desired location with the shortcut Ctrl+V.

Ctrl+X will cut the item, i.e. it removes the original version and moves it to the clipboard to be pasted elsewhere, also with Ctrl+V .

Ctrl+Z will undo the last action that was performed and Ctrl+Y will redo it .

If, for example, you are writing a text and you are not satisfied with the last words. You can undo them by using Ctrl+Z a few times. If you change your mind and want to review the undone words or phrase, Ctrl+Y allows you to go back.

This shortcut allows you to quickly save a document. It doesn’t matter if you are on Word, Photoshop or other, this is the shortcut that the vast majority of programs recognize for quick saving.

Using the shortcut Ctrl+P will open the print window of the current document.

This shortcut allows you to quickly add a link (for example to a web page) to the selected text.

Ctrl+F will open the search bar of just about any program/application.

If, for example, you want to search for specific information in a long text. Using this shortcut, you can enter a keyword and quickly search for it in the page or document.

It is also very practical for correcting or standardizing texts. Let’s say you are writing some text and you realize that a word is not written with a uniform spelling throughout the document. By using the shortcut Ctrl+F, you can search for the word in question to review where it appears in the text.

These two shortcuts make it easier to navigate from one application to another, Alt+Tab, or from one tab to another, Ctrl+Tab .

For example, if you have several tabs open in Google Chrome, you can select them one after another with Ctrl+Tab. Alt+Tab will instead open a box that will show thumbnails of all open windows and applications on your computer. By holding Alt and using Tab to switch between them, you can select which window to open by simply releasing Alt .

In a text, the Ctrl+Backspace and Ctrl+Delete shortcuts delete a whole word at a time instead of a single letter.

Using the Ctrl+ left or right arrow keys moves the cursor an entire word at a time instead of a single letter, saving us from having to use the mouse for quick paragraph navigation.

The shortcut Ctrl+Home allows you to return to the beginning of the document and Ctrl+End allows you to move to its end. It’s a shortcut that works with most software/applications, whether it’s a text file or a web page.

Page Up, Page Down and Spacebar

The Page up and Page Down keys allow you to quickly move up and down in a page, and the spacebar can be used, among other things in a web browser, to move down the page.

These shortcuts allow you to quickly change the formatting of selected text.

is the most common shortcut for putting text in bold (as in the Google Docs suite for example) but the shortcut for this option in Office and Office online is rather Ctrl+G.

Use this button to quickly rename the selected file/folder.

By pressing the F5 key , the current page is refreshed.

This shortcut closes the current window or application.

This shortcut displays the properties of the selected file/folder.

This shortcut opens a file in the current program.

This shortcut closes the active document in an application that allows you to have several documents open at the same time.

In addition to offering us a new visual and a host of new options, the Windows 10 operating system also offers many new really useful keyboard shortcuts.

Here are the most interesting:

Windows+ arrows (up, down, left or right)

Windows allows us to organize our used windows and place two separated vertically, or place four, one in each of the corners. The Windows key followed by one of the arrows allows us to quickly place the current window at the desired location.

Like the Control+Tab shortcut, this key combination allows us to preview open windows and make a quick selection. This shortcut also allows you to switch from one desktop to another.

These shortcuts make it easy to navigate from one desktop to another. Windows+Ctrl+D creates a new desktop and Windows+Ctrl+left or right arrow key toggles between them.

This shortcut opens the computer settings.

This shortcut allows you to lock the session and switch user accounts.

This key combination will take a screenshot and save it in a folder named “screenshots” or “screenshots” in the computer’s “my pictures” folder.

Open Cortana in listening mode. It is the intelligent personal assistant developed by Microsoft which is not activated by default, you have to go to authorize it in the settings.

By holding Windows and the “,” key, you can peek into the desktop without closing the windows. Once the keys are released, the image returns to the current window.

The combination of the Windows key and the up and down arrows allows you to display the window in full screen (Windows+up arrow) , or to reduce it (Windows+down arrow) .

These shortcuts are particularly handy when working with multiple screens, as they allow you to move a window from one screen to another.

Tell us in the comments what are your favorite shortcuts